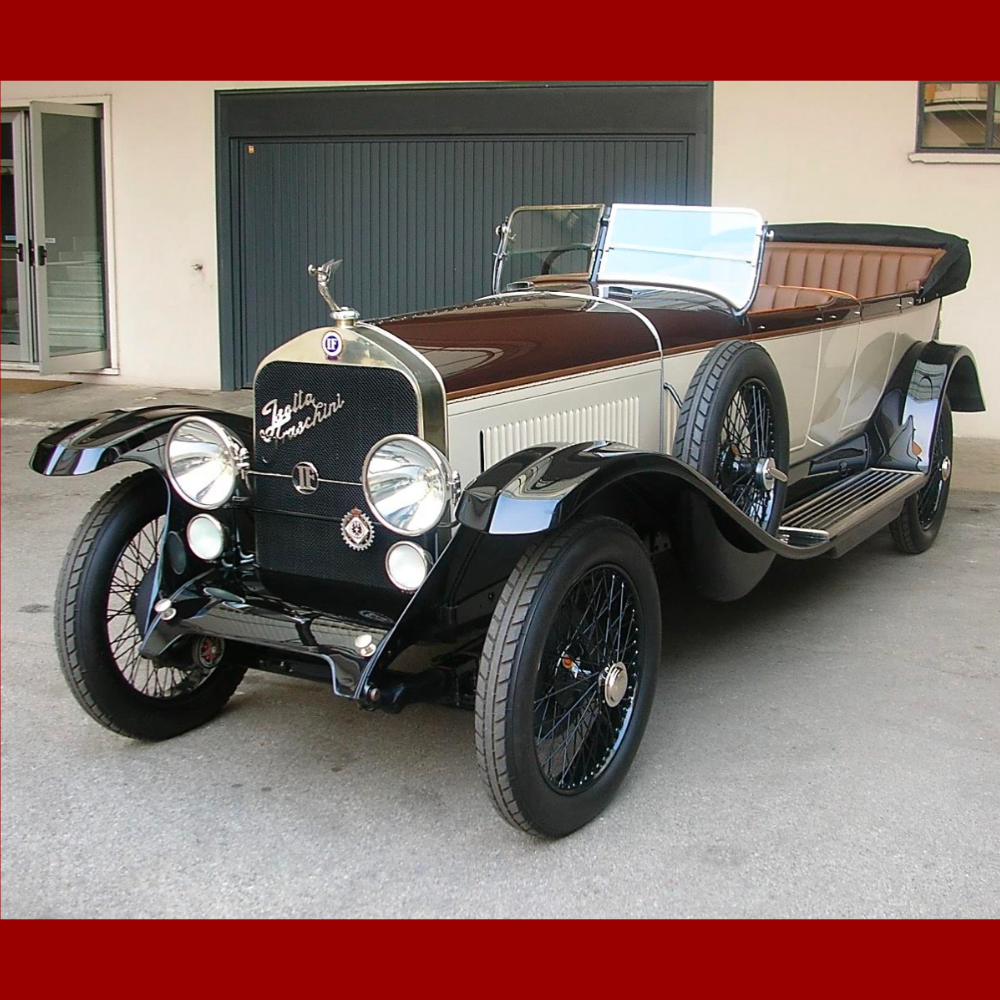 The car has been restored to its splendor after 10 years of meticulous and meticulous restoration both outside and inside and in all the mechanical parts. The car is perfect like new. All the restoration work has obviously been certified and we attach a detailed report.
The historic car has received all the awards in the sector of the category, and every kind of praise, so much so that it was chosen as a historic car by the Italian state, to exhibit it at the Shanghai Expo.

In addition, the car has participated in the most important exhibitions in the sector organised around the world, where it has been appreciated for its beauty and the particular restoration work, so much so, that it also won races, against other historic cars of the same period of other famous brands. 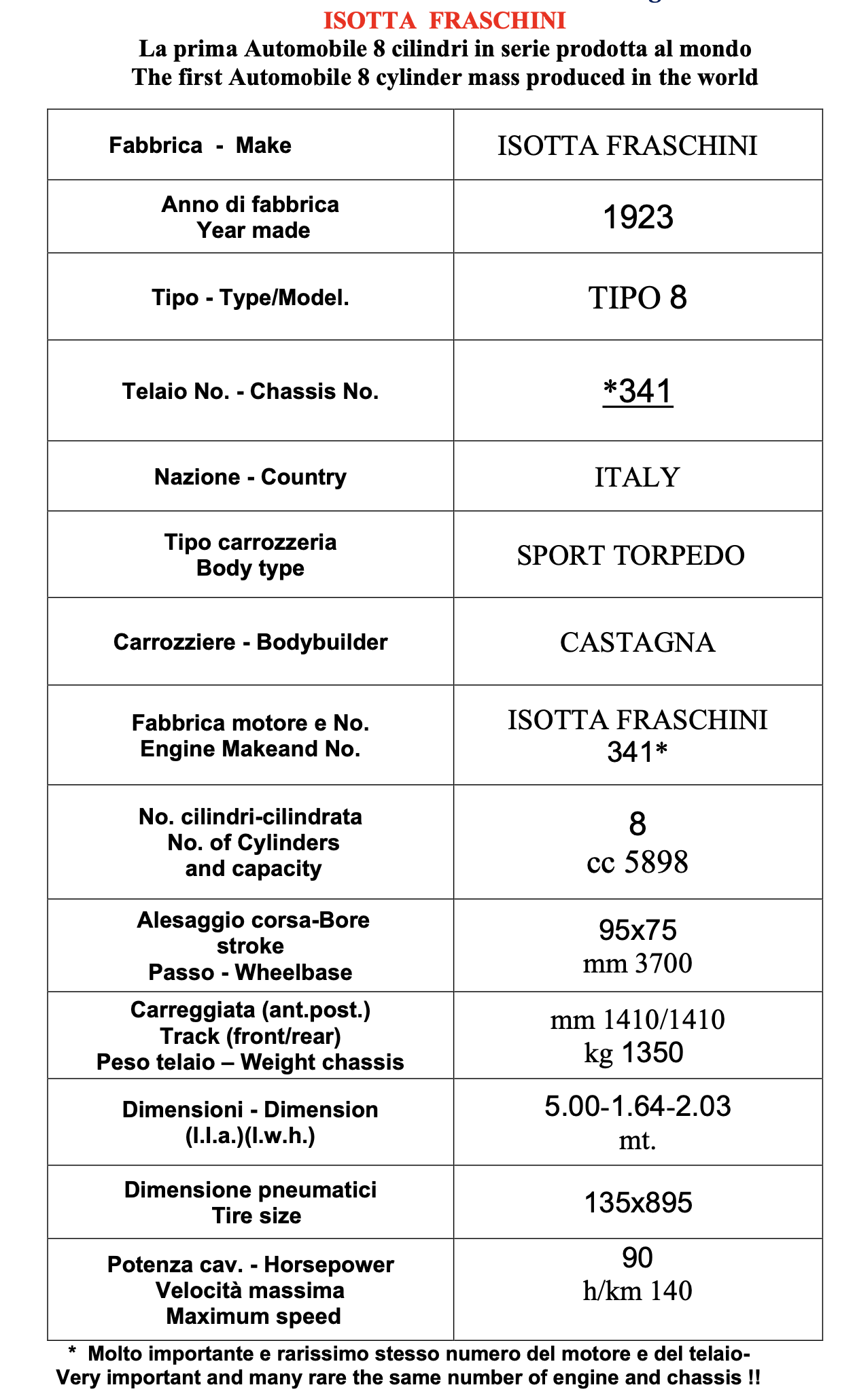 10 YEARS OF RESTORATION …. AND THE STORY OF AN EXCELLENT FINDING
Isotta Fraschini, the subject of this restoration, was found by the friend and great collector and lover of vintage cars: Edoardo Magnone, in 1975 in Lima-Peru by a dealer of used cars. It ‘s an Isotta Fraschini type 8 torpedo sport of 1923, bodybuilder Castagna, chassis number 341 and engine number 341.
In those years, in fact, many cars of this size and grandeur were brought in South America (approximately fifty) by the same wealthy owners who remained fascinated by these cars during their leisure or work travels in Europe. They bought the chassis and the motor directly from IF, ranging by a famous bodybuilder (Castagna, Sala, Farina, etc.), they did do the body off-set, as they pleased and at the end, having shelled out staggering figures (also referred to 180,000 Lire), they returned to their country, with the ship and with their luxury cars. This is what was left of one of those cars … shame that, both from the IF archives and from those of famous bodybuilders of those years, there is no trace of this vehicle. A little because it was lost in the bombing of the last war, a little because the same IF has begun to take the story of the owners and the destination of its chassis from Model 8 A., that is from 1924. It was certainly belonged to a wealthy Peruvian of those years or, perhaps more plausible, was purchased from one of over thirty wealthy Brazilians who then led an IF in South America and then later was sold to the used car market in Peru.

At this point, once found a specimen of the car so important, even if very deteriorated, but with several fundamental and original parts, it was essential to complete the work, to provide for its restoration. Therefore, from Peru, having been filed for over 10 years at the Fiat dealer in Lima, is loaded and sent to England by the famous restorer: A. Archer of Essex-London. This great professional in three years manages to dismantle and rebuild the entire engine and fully restore the, chassis and the electrical bring, everything as it was originally with great skill and competence, so as to appear as soon as it leaves the establishments of Isotta Fraschini of Milan 67 years ago. In 1989 the work of Archer was completed, the car is sent to Italy to be restored in part on the body. After the discovery of a body type 8 Torpedo Sport Castagna and after 10 years of fruitless searches in various parts of Italy and France, in May 1999, finally the friend Fabio Calligaris, owner of the “atelier Fuoriserie”, agrees to assume the onerous task of restoring the body. Here begins the adventure more difficult. The body very deteriorated is rebuilt exactly as the original by a true expert “scoccaio“: Ivano Raniero of Milan. All wooden parts: profile, lockers and cabinets (fortunately, though damaged, had been found some original parts), are redone by an artisan of Ferrara: the cabinetmaker Maurizio Martinucci.

In 6 / 7 months of work are rebuilt as original bodywork with walnut inlaid with precious woods such as ebony, pink, etc. .. Once made they are polished with the ancient system of shellac applied to buffer. At the same time everything is faithfully rebuilt to the original and in order to bring it to its former glory of 84 years ago, it took seven long years! In 2007, finally, the work of art, a single copy, is completed. Today, after almost 90 years, is the clear example of Isotta Fraschini Type 8 with more beautiful and fully restored and functioning in the world sport Castagna’s body. So much that in 2010 it was chosen by Ministry of Foreign Affairs to represent the excellence of made in Italy to Italy pavilion at Shanghai Expo. During the 6 months, which it was exhibited at the entrance of the pavilion, was admired by almost 70 million visitors.
In 2011 it was invited, by the Emir of Kuwait, to participate in the annual Competition of Elegance for vintage cars where it won the 1st award, beating off another Isotta Fraschini, 6 Rolls Royce, 5 Bugatti and 1 Hispano Suiza. 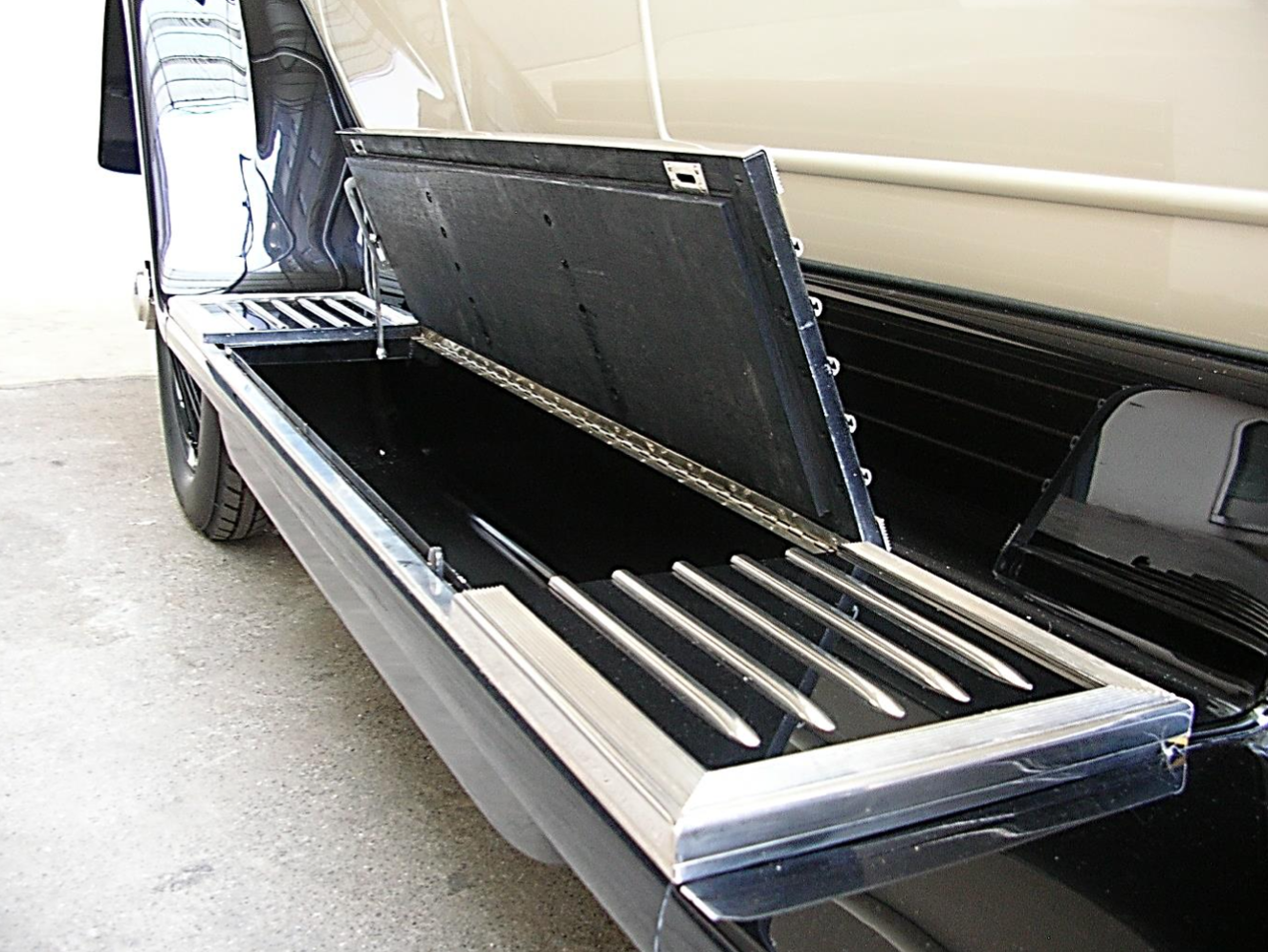